Thursday’s rug pull was very significant and marked yet another setback for the bulls on Wall Street who have had a nightmare start to the new year. Mind you, crypto investors just cannot catch a break with prices breaking further lower today due to the general risk-off environment across the financial markets. Even the mighty crude oil has reversed, while gold hangs in the balance as investors weigh the prospects of tighter monetary policy against positive influences on the metal such as high levels of inflation and haven flows.

Why is everything selling off?

The number on reason behind the risk off tone is surging inflation and the prospects of faster-than-expected monetary policy tightening. The era of ZIRP is beyond us as central banks now start to withdraw support. Investors now have to rely on solid company fundamentals than chasing momentum. Most companies and sectors remain significantly overvalued, as Netflix investors have found out. With inflation eating into disposable incomes, it is possible that investing could take a hit while certain group of investors cash out to release funds for real-world purchases. Volatility is here to stay, especially if the 200-day moving average also breaks on the S&P 500:

Although off its best levels, gold is still up for the second week, suggesting investors have been seeking protection against surging inflation and as excessive risk taking in equities and crypto came to an end.

I think the markets have priced in a hawkish Fed meeting already and gold has been able to shrug off the recent strength in yields. So, a potential breakout from the current ranges should not be too surprising. It would help if the Fed were to talk down the prospects of an even faster tightening cycle.

As we mentioned the possibility earlier in the week, gold turned lower from around $1845 resistance, but it is now testing the breakout area around $1830, which needs to hold to validate Wednesday’s sharp breakout. Given how gold has been able to climb higher in the past couple of weeks, it is possible we could see renewed strength come in later today, especially if investors dump equities again. 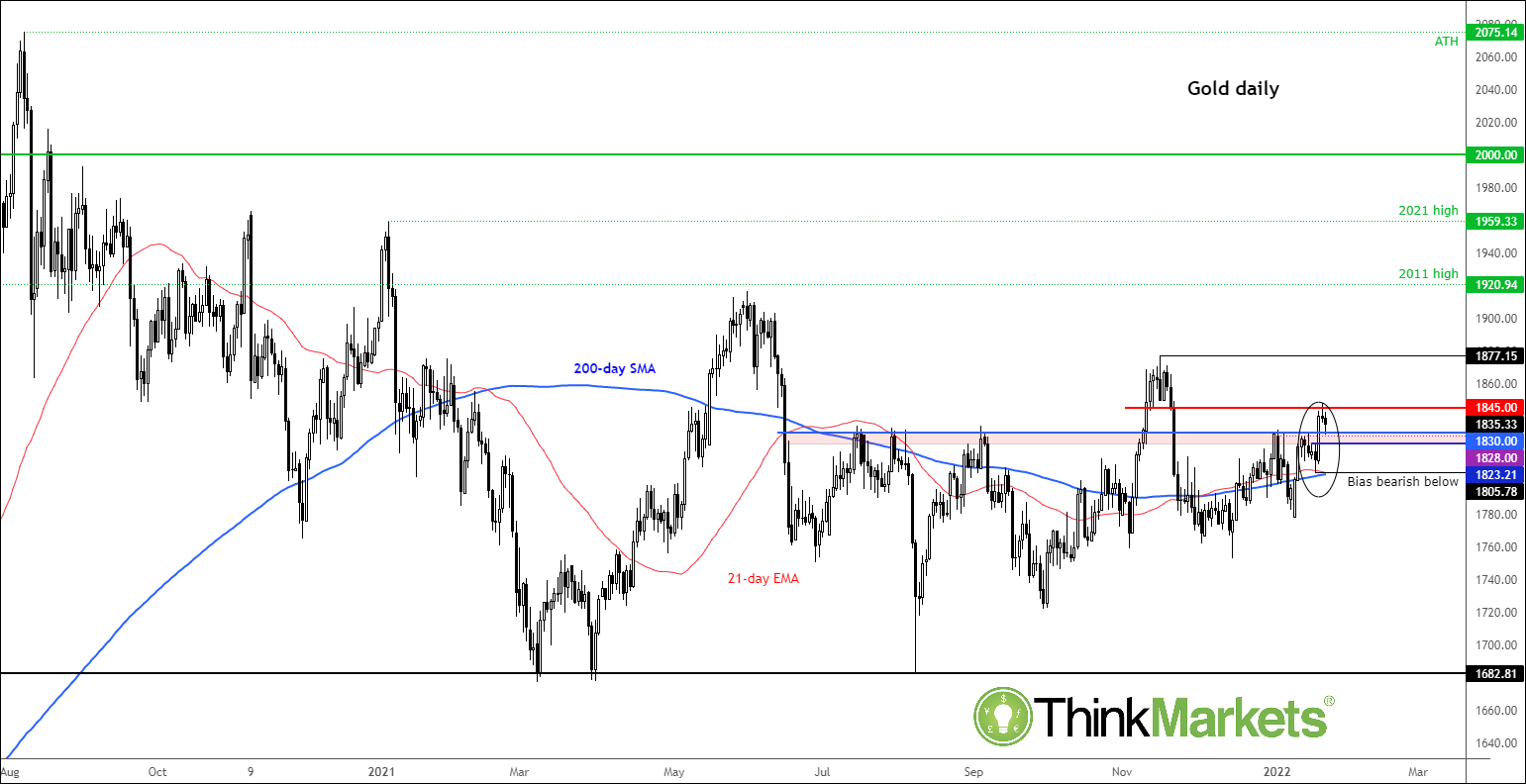 Crude oil prices have fallen back from their recent highs alone with risk assets following the sharp reversal on Wall Street Thursday. The daily chart of Brent shows an inverted hammer on Thursday, while the weekly shows the significance of the $86.50ish level, which was significant resistance in the past. Although we have broken above this level, failure to hold that breakout could ignite a sharp sell-off. 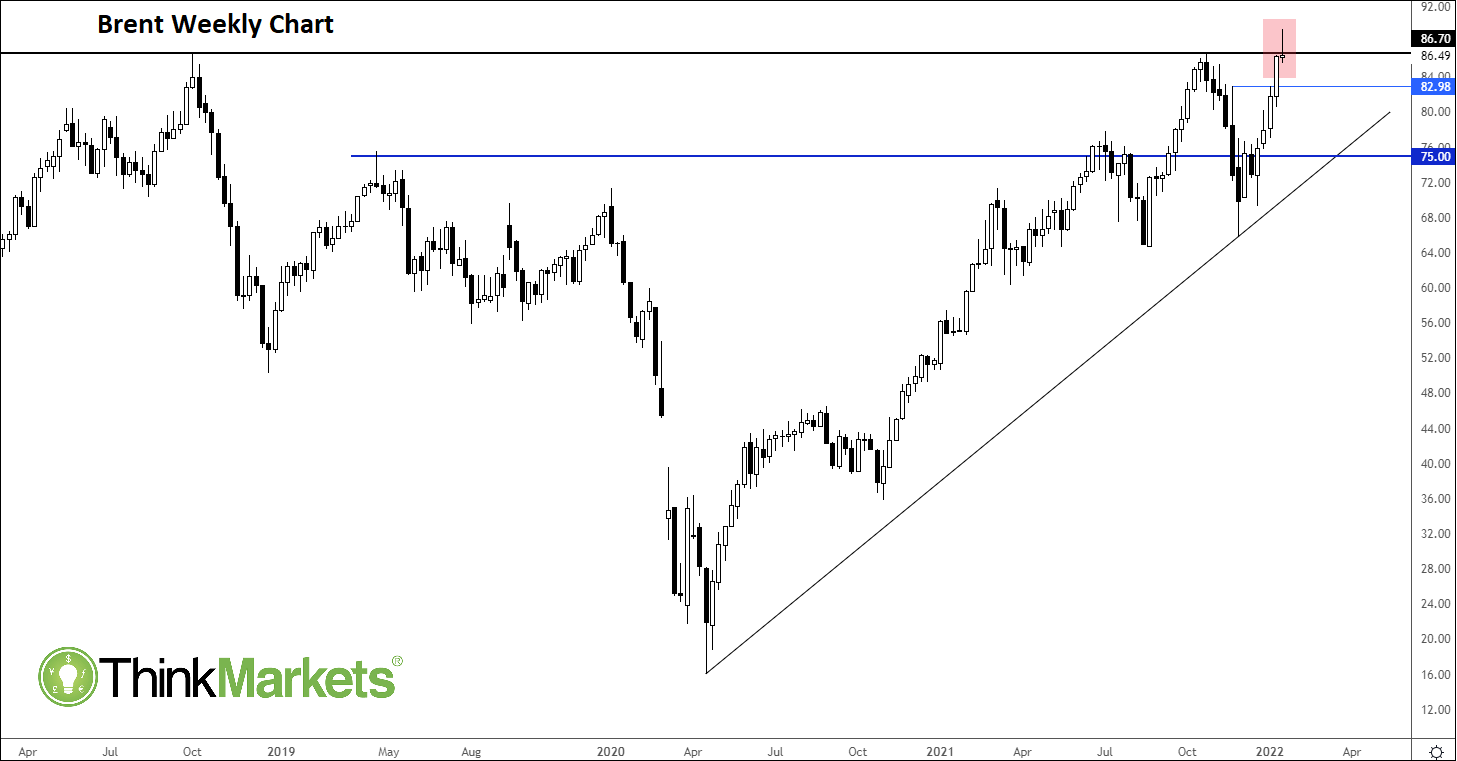 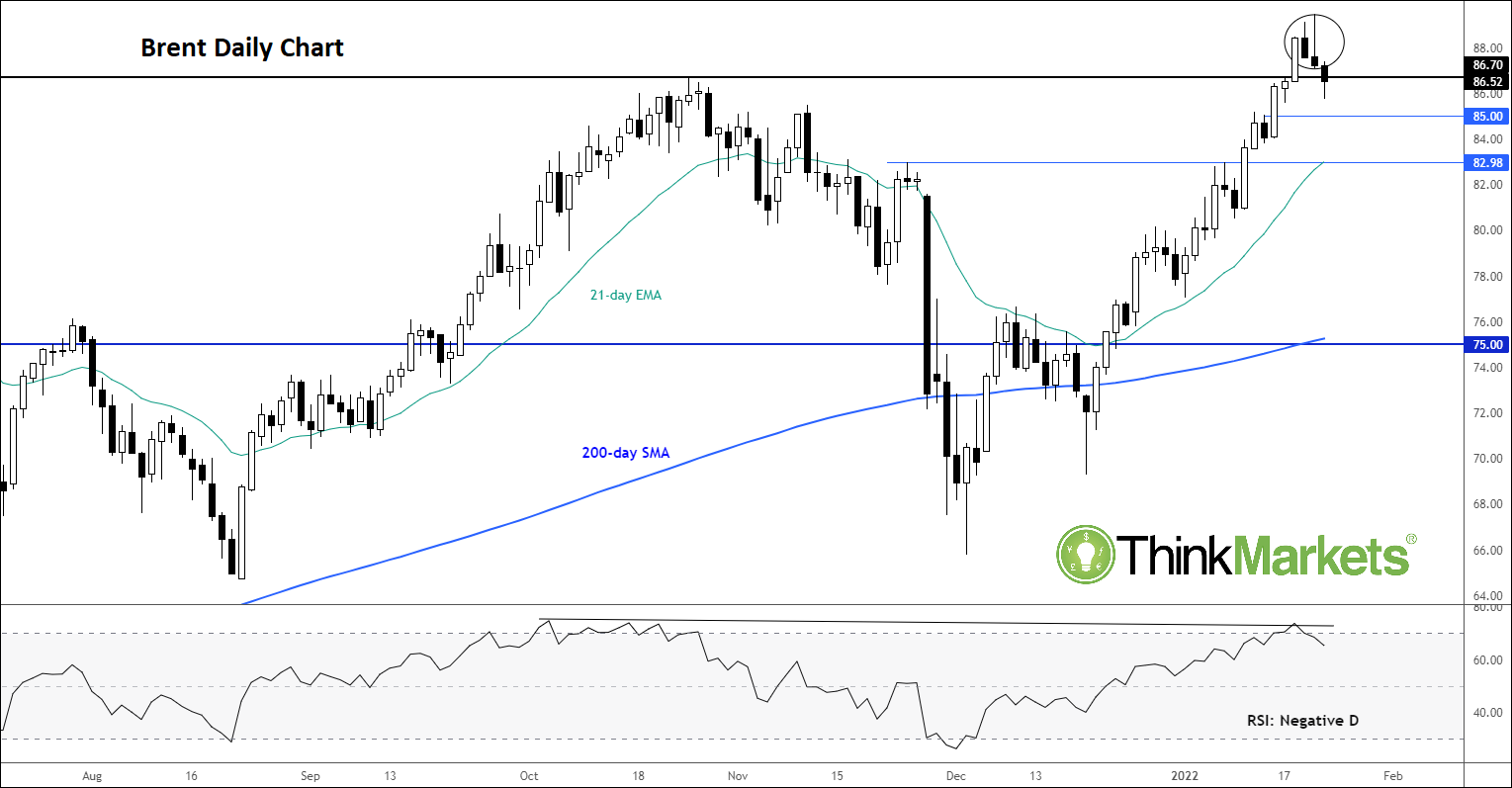 Source for all charts in this article: ThinkMarkets and TradingView.com

Any opinions, news, research, analyses, prices or other information contained on this website is provided as general market commentary and does not constitute investment advice. ThinkMarkets will not accept liability for any loss or damage including, without limitation, to any loss of profit which may arise directly or indirectly from use of or reliance on such information.